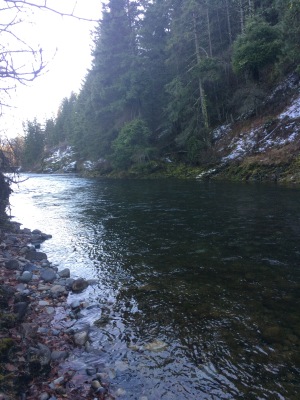 Hit the river for the day. I tied a few flies this morning and hit the river around 10:30 ish. The fog was just starting to burn off when I got to the first spot on the upper river. The flows were up from the shot of rain and snow we got so wading was tough but I managed to fish a few good looking places before moving on. The river was too swollen near Three Bridges for me to try my luck at a few of my favorite winter fishing spots up and down river of there.

I decided to head back into town and hit my old friend the Cle Elum. This river never ceases to amaze me. I hiked upriver today to a spot I haven’t visited in a while. I remember hiking the banks on a early summer day after they start to back the flows off from the dam above. There is a great drake hatch and some of the most perfect looking water I have seen on a river hidden up in the trees. The only way to access it is to walk it or float it and you have to walk a bit so not a lot of people fish it.

The sun was burning off the left over water still clinging to the rocks, moss, and trees when I stripped out enough line for a proper cast. The section I was standing below is where the river narrows between some log jams. There is a deep trough, a shelf, and a large deep eddy on the river right side. A nice 30 foot cast to the top of the trough along the seam between the slow and fast water dropped. Another 30 or so dropped before I finally hooked a fish.

The sunlight was shining brightly through the trees. It hit the water and lit up the mossy and algae covered stones below. Midges flew from the surface of the water and congregated along the edges of the river near still water between the pebbles and rocks. I could see a shape holding in the seam. It flashed. My excitement grew almost uncontainable. I cast far up river, knowing there were probably other fish in the hole. I finally got a proper drift through the cross currents while trying not to spook the fish that was still flashing and feeding below. I did not want to miss my opportunity as the sun could be off the surface at any moment and all could be lost.

My indicator shot down and I set the hook with a high stick and a pull on the slack line. The fish hung in the fast water and shook slightly. I thought for sure it was a bloddy white fish but as I worked the fish into the slow water near me it spooked and woke up. It took line out with a slow hard pull and went deep. Then the head shaking came and I thought I was going to loose the fish since it was on the bottom size 16 zebra midge. One roll without tension and its over dude. My Winston bent and arced and vibrated as the fish tried to move into deeper water below me.

The trout took too much time in the fast water and I was patient. The beating the river gave me last week I was determined to do this correctly. The fish admitted he had been outsmarted and I pulled him into my nets embrace. 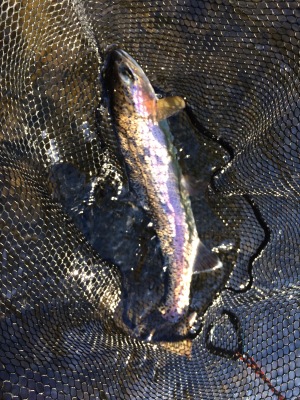 A beautiful Rainbow Trout. Bigger than I thought as well. A delightful surprise. I did not measure but a proper 16 inches of healthy wild rainbow would have been my guess. A hefty fish as well. The water was bitter cold so I kept it in the net as not to shock it too bad. I took my flies from the trouts jaw, had my moment that I have been longing for all winter long, and released it from the net. I gave the tail a light touch and the trout darted back into the deep water on the other side of the river.

Content. The river only graced me with one trout today. I only fished for just over an hour and spent most of it walking upriver. I saw several trout working the midges underneath but they were easily spooked being in the sunlit water. Sometimes, especially in winter fishing, one is all you get.

I will be floating the upper river tomorrow and we shall see if she will give up a few more for a moment or two.