So you’ve been stuck indoors all winter long patiently waiting for the rivers to thaw and the trouts to wake up.  Now that winter seems to be loosening its grip the waiting is almost unbearable.  Some of the more “hardcore” anglers will venture out and net a few fish after spending 3 to 4 hours trudging through the snow and in the craptastic weather.  Mostly we do it because we can’t torture ourselves by just thinking about tight lines anymore and have to put ourselves through some pretty miserable days just for that one moment with a trout…its not called “hardcore” for nothing I guess.  I just call it being a fly angler and I am fortunate that my entire life these days is basically all about trout.

I love this transition period.  When everyone starts thinking about fishing again.  All the guides and shops start coming out of the woodwork, your old buddies that know you are a guide and have a boat call ya up and ask about how the river is.  I’ve been watching this river for 10 years and after the drought and everything that hit us last year I am more stoked and anxious for this coming 2016 trout season than any other.  The early season is a great time to fish.  There aren’t many other anglers on the river, the bigger fish are easier to catch, there are only a few things that trout will actually eat, and only a few places they will be as the spring slowly approaches.  Knowing how to fish in the early season separates the men from the boys, the ladies from the girls, the hogs from the dinks, if you will…or just means you can’t take it anymore and need to stick some trout.

Early Season techniques aren’t rocket science, just fishy science.  Trout are still sleepy, and their feeding habits are directly related to the river water temperature.  When water temps start rising above 40 degrees trout metabolism starts up and they require more food to function.  They’ve been in hibernation basically for the winter, podded up with buddies eating only when they absolutely need it.  Now that things are warming up they start needing more food and another thing starts to weigh on the trouts mind…sex.  Spawning to be exact.  Fish need a lot of protein in order to spawn, which means they need food.  Lots of food.  Soon fish will be gorging themselves on stoneflies, baitfish, small mayflies, and midges like crazy.

Flies. So lets talk about flies first, and start with Nymphs:  The good ol’ Pats Stone is a good go too during this time of year.  Its chunky, looks like a lot of bugs, and is slow and easy to eat.  Boom, pattern one…get to tying.  Midges, those damned little bastards that are typically so small you swear the trout is taking a breath and not eating.  Nope, they are eating size 18 and smaller little midge worms so grab those zebra midge patterns in whatever color you want.  I like red and black with a red glass bead and some silver wire.  I have them in blue, purple, orange, white, pink, green, all the colors of the rainbow.  But for reals…tie up some zebra midge patterns and use them as trailers or just by themselves.  BWO’s or the Blue Wing Olive Mayfly has lots of nymphs patterns. I like the WD40, Psycho Baetis, that damned Tungsten Yeagar Hares Ear thing.  All good for nymphing those little mayfly dudes. 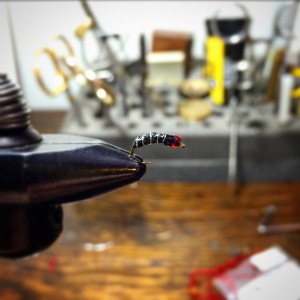 The San Juan Wormy should always be around during the winter and runoff periods as well.  We don’t like to talk about it, but some anglers go straight for the worm because it works, others hold onto it as a last resort when all the other “proper” patterns fail.  I tend to play dirty, I throw what fish are gonna eat.  That kind of settles nymphs for the early season.  Eggs can also be used but that is playing real dirty and I will leave each angler to their own on that one.

For Dries, if you are wicked lucky you might get a trout that has decided to look up.  They are typically eating one of two things during this time of year.  A midge…or a Blue Wing Olive.  If you see a fish surface and don’t see anything on the water to discern what it may be dining on…its a midge.  I have size 18 to 22 little gnat patterns with wings.  They don’t look like much but I catch the occasional eager eating trout on them.  The BWO should be easy to identify, the little olive mayfly is delicate and hatches in droves typically.  Fish pod up and feed actively when a hatch is happening.  The little bugs also congregate in slow water and fish tend to target them there as most trout are just chilling in the deep part of the pool already.  I use biot body emergers for the BWO mostly.  They have a CDC post, with a light shuck, they work really well.  The final dry is the Skwalla Stonefly. Skwallas happen on some western rivers and they are easy to see and trout hit them like they hit most stoneflies…you’ll know when its happening, and this is typically the official start of the spring trout season. I use bullet heads a lot, and some secret patterns that twitch really well.  All size 10.  Oh, and my go to Skwalla pattern is the Purple Chubby…they haven’t seen it since the summer, and they really want to eat it.

Techniques.  Dries are easy, see a fish rise, cast at it, hope for the best.  When fish start moving in to feed actively on dries look for slow seams, back eddies, and slow pools with foam.  Fish look here and they don’t have to expel a bunch of energy fighting current.  Water temps will typically be around 42-45 when BWO happen.  Air temp becomes a factor as well, bugs don’t like to hatch if they can’t dry out their wings.  Sunshine days, or overcast days with air temps above 40 will set the conditions for those little olive morsels in the early season.  For Skwallas, you know the drill, close to the bank, some twitchy action…BOOM!  Ya…like cold weather hopper fishing, paying close attention to areas where there is foliage overhanging the river, rip rap areas, large boulders, and rocky ledges.  Stoneflies like to hang out there.  So do fish.

I use long leaders, typically 12 feet, for mayfly and midge dry fly setups, with 5x flouro tippet or 6x mono.  The flouro helps with super spooky fish in gin clear water like we have here in the upper yak.  (SIDE NOTE:  All the damn eagles are making the trouts super smart.  Damn raptors.)  For Skwalla set up, the standard 9 foot leader and 5x or 4x mono gets it done.  I put a lot of action on the fly typically.

I recently started using another technique that is common in New Zealand and other areas for super spooky fish.  I shorten up my leader to 7 feet, and go super light on tippet but use a good 15 inches of it.  Typically flouo in 5x or smaller.  Then I stalk up close to the fish, stay low, and make a short single shot cast, no false casting.  I try and keep as much of the line and leader off the water as possible with a high stick.  This makes it so there is little to no line indent in the water surface and little line shadow.  Now, you may only get a shot or two at the trout, but this technique is for those really spooky fish that you come across.  The ones that take 20 minutes to come back into the lane to feed after you make a shadow when making your first cast at them.  Sneaky trouts.  Its really awesome when it all clicks and you get to meet a really surprised and hangry trout.

Techniques for Nymphs.  Well…go deep and work your way up.  I work water like a steelheader.  I pick my run, or my pool, or my line, and I start breaking it apart one cast at a time; covering every inch of it.  Every INCH!  Get after it.  They are in there somewhere.  I look for that slow to walking speed water, a good place to just hang out and chill.  The trout have basically been doing the equivalent of “Netflix and Chill” all winter long.   Just like me.  So look for water that would represent a chill day on the couch for a trout.  Ya…throw your nymphs through there.  I start deep…clears out all the whitefish, and then I work my way up if I don’t hook up after dredging the bottom.  I’m methodical with my nymph game.  I will work a piece of water at 8 feet, 5 feet, 3 feet of depth, and work each 6-8 inch lane from top to bottom.  Sometimes I just pick one piece of water and only work it for the day.  Those trout can only be in a few places in the river, so find the best “trout couches” and interrupt their Netflix session with a hook in the mouth. 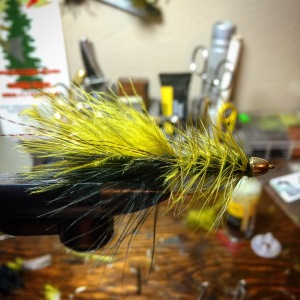 Streamers!  I use them a lot more now.  I like a nice 4-7 ips 10ft. sink tip and a piece of meat.  I don’t throw little streamers very often.  Maybe a size 6 Bugger or something, but everything else is Kelly Galloup ridiculous big.  Mmmm, big fish eat big “little” fish.  I target the water the same way as nymphing, just swing and strip style.

I don’t use a boat very often during the early season.  It’s a lot of work when you only have about 4 good hours to fish.  Besides, walk and wading all bundled up and in 36-45 degree water shaves fat in preparation for the coming guide season.  It also gives me the chance to get back in touch with the river after the long winter away.  I may only fish a handful of times during the actual winter if at all.  Once the early season arrives its time to get back into trout mode and being able to set foot in the river a few times a week or every day of the week is how I reconnect.

Being able to stand against the current, casting in the snow, my breath clouding in front of me.  My beard and mustache crisp with frost.  The distinctive sound of a bald eagle’s chirp as it sits halfway up the barren cotton wood, head cocked to one side.  That “shink” sound that the line makes as it travels through an iced over guide…an indicator bobs along slowly…it dips gently…tension…head shake…the pulse of a well wintered wild trout against the rod…oh ya…that’s what I need after a long winter.

So there’s some early season trout chasing pointers from this trout guide.  Over the next three weeks the Yakima River  will start to wake up along with other western rivers. These techniques should help you have more successful days.  Of course, if you have any questions just ask.  And I’ll do a business plug here:

Get out there and chase some trout.  I hope to see ya riverside this season.