Does this make you want to go fish?

EGO…that’s the big and most important one.  Ego has no place in nature, fish have no ego.  Ego is not to be confused with confidence and attitude, which are both encouraged and both of which are backed up by skill and experience.  No…ego is a human thing, and Ego serves little purpose in fly fishing.  Ego just makes you an asshat…ya…I said.  Wow, you caught, 40 fish….you caught the biggest fish…you put more time on the water than I did…in reality…the only person who cares….is you…fish don’t know the difference between anglers.  If you’ve caught the biggest fish, or the most, or whatever, the fish…doesn’t give two shits.  If you get a text from an angler buddy and the first thought in your mind is…man I don’t wanna fish with that dude…its probably because of their ego.  Don’t be that angler…I don’t fish with them, and I don’t do repeat trips with them when I get one out of the blue in my boat.

Does this make you want to go fish more?

Which brings us to fish.  Fly fishing at its core is about the fish.  Like all fishing.  But unlike other forms or ways of angling for fish, fly fishing has a different connection to the fish.  When concerning trout (which is the majority of the fly fishing community) using flies to mimic the natural world to trick a trout that is otherwise unaware of the human presence, is very unique compared to running a lure through the water and hoping for a response from the fish.  Fly fishing is more connected to the natural world in which the trout or fish is.  And if you can’t understand the difference between fly fishing and other forms of angling then you aren’t a fly angler, and this conversation doesn’t pertain to you.

Now, I love to show off my fish.  But there came a time in my fly angling when I realized that all these pictures of me holding trout were not really about the trout…they were about me.  Look what I did!  Look what I conquered!  Me me me, I did it, I…I…you get it.  I was taking pictures of me with these fish, to prove I actually caught them…there’s that pesky ego, to show other anglers that I am the one who conquered or bested this fish…hmmm…ego again.  I started realizing that I had turned into an asshat.  Now you see fish used to sell products.  We pimp out our fish in order to sell more hats, more trips, more flies, everything…when the trout really isn’t what we are selling.  We are selling the selfie, the hero shot, the cliche marketing picture that you can post on FB or instagram in order to make ourselves or our product more popular in order to make more money, or be more liked, or to make people envious of us, ego…stroke it.  And the industry and community is to blame for it too.  There was a time that fly shop staff said the only way they would believe me is if I took a picture…double asshats.  Those who lie about fishing stories are just stroking their ego some more.  Stop it…that kind of thing should be done in the privacy of ones home.

Does a picture have to have a fish to sell the lifestyle of a fly angler?

Fish don’t care about any of that and they ain’t seeing any return on those photos being posted.  And stroking ego with fish is just weird and a little strange, they didn’t consent, they are tired from fighting to get a hook out of their mouth, they aren’t in the state of mind to defend themselves against over handling, and the ones that do decide they want nothing to do with an angler typically are uncooperative or just break you off and give you the finger.  We take this wild animal, and we make it something human, we turn it into a tool to better our image or the image of our product.  At that point they aren’t trout or fish anymore. They are just a piece of jewelry.  They have become a thing, an object, and instead of being the focus of our pursuit to trick fish with flies, we have shifted all that focus onto the angler.  The term Trout Porn becomes a very different thing when you think a little past the hero shot or fish selfie.  We are literally taking the one thing we love to chase and catch…the fish, and turning it into an ego stroking, merchandise pimping whore.  I’m guilty of it, I still do it…but I acknowledge it and understand that it is a part of business…but where does it stop?  Where do I personally as an angler draw the line?

Man vs Trout and River

This brings me to competition.  Two fly events, fly fishing competitions, measuring fish, weighing fish, point systems on fish…what a bunch of malarkey.  All we are doing at that point is playing “Mine’s Bigger than Yours.”  It’s childish and strange that we have to make something like fly fishing a competition.  We have baseball, football, soccer, UFC, the GOP debates to entertain and give us competition…why do we have to bastardize fly fishing with competition?  Fly fishing and fishing in general is about fun, but why do we have to compete in order to have fun?  That being said, I think testing an anglers skills…such as casting competitions, target competitions, and the like are something that should be encouraged.  Those skills translate to the river and if you can cast at targets accurately at 90 feet I have no doubt that when a situation with a large fish presents itself, you’ll have a higher chance of success against that fish.  If you need to stroke your ego, do it yourself, not with a fish.  I have more respect for an angler that is also a casting champion, than an angler who catches big fish and has lots of pictures.

Is this not good enough?

Of course, as many anglers know, the best cast, the best rod, the best fly, doesn’t always catch the best fish.  I have had anglers that never even held a fly rod an hour before, hook into life changing fish and successfully be introduced to that fish with a nice handshake from the fish as it is released.  Isn’t that what this fly fishing thing is about?  Catching fish?  Having fun, learning the skills to catch more fish, meeting fish, testing an anglers skills against nature…isn’t that enough competition?  Is that not, the most epic and legendary of competitions?  Human against Nature.  Angler vs Trout, Predator vs Alien, DeCaprio vs The Academy, oh…wait…no one more, Trump vs Twitter…okay I’m done.

I find it odd that it isn’t enough.  Fish have no competition, except to survive, so when we use them to make ourselves greater than them, in my opinion, we are losing exactly that essence that makes fly fishing unique and different than other forms of angling.  When we have to quantify fly fishing with points, ego stroking photos, or to sell products, are we taking something away from the sport and the fish that we pursue?  I leave that question to be answered by the individual.  I will tell you that I no longer take fish out of the water for my personal photos.  Hell, I rarely take photos of the majority of the fish I catch anymore.  I do use photos for selling my business, but I have found a place I am comfortable with when I pimp out fish. 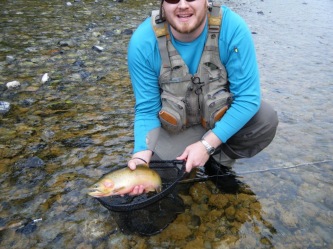 About the fish or the angler?

I do occasionally take a photo of a fish out of water with clients.  Sometimes the situation doesn’t allow for a quick photo of the fish in the water, or sometimes a quick hold up before release while floating is a better alternative to sliding over to the river edge, keeping the fish in the net and over handling the fish to get a photo.  When a fish is hooked I have an internal countdown timer, when I get close to zero, the fish gets put back no matter what, even if we haven’t netted it yet.  I break fish off on purpose, I have clients let fish go, my boat my rules.  Don’t like it?  Hire a guide that is less conservative with how they treat and handle fish.  It falls to the angler to decide.  And I don’t have to associate myself with those who ‘disrespect’ the fish in my opinion.  As a guide I have to find a comfort zone and I do.  I have to sell trips, but not at the expense of the one thing I have to keep alive in order to do those trips…the fish.  I understand that the industry needs photos of fish and anglers to sell things as well.  I tend to look for and support companies that have a happy median between the ego stroke and respect for the fish. 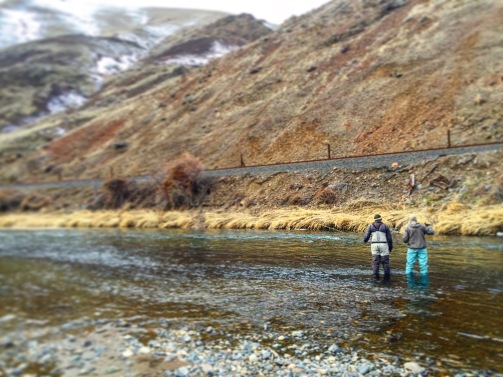 Is this not what you are really looking for?

I do not compete in any aspect of fly fishing; except the competition with the trout and river.  I fly fish because without it I wouldn’t be who I am.  It is a part of me, the respect and awe I have for fly fishing and the fish that I trick give me a sense of humanity that I haven’t found elsewhere.  It is all about the fish for me…and they are revered and respected because being able to trick them and meet them via fly and rod is a special experience that should never be tainted with anything other than the pure moment between nature and human.   The only competition you will find me engaging in when it comes to fly fishing: who pays for or drives the shuttle, brings the beer and smoke, who rows first, who’s gonna handle the whitefish, who’s got next, and who picks the tunes.  Typically decided upon by a quick game of ro sham bo, the best reach cast, or…dude…you caught two fish, its your turn to row.

Hope to see you riverside.  Try stroking the trouts ego.