The Entrance to the Teanaway

Many who follow and read the blog read my post on the Teanaway River last season.  That post was read more than any other blog I have written to date.  Read several hundred times, I was contacted by multiple individuals and organizations about that post.  As the rain is pouring and I couldn’t stand to be in the house for the entirety of another day, I took the dog and headed up into the woods and the banks of the Teanaway River today.

The river is a torrent.  Angry and full of churning green water.  It has swept trees and boulders along its bed with sheer force as it once again has is thirst quenched by the heavy mountain snows mother nature blessed us with this winter.  The headwaters of the river are still locked away by the snow.  Several feet are still on the ground, even the lowlands where just before the forest takes hold of the land are filled with snow.  I haven’t seen the river or the forest surrounding it like this in several years.  The Teanaway seem like her old self again, much like her older and larger sister the Yakima. 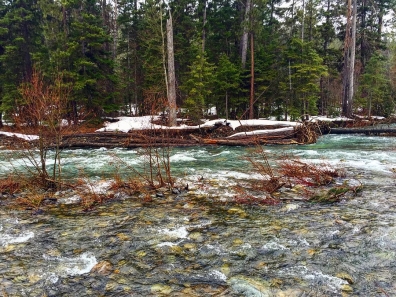 The one thing that I noticed and got me thinking about the effects of the drought last year, was the fact that the entire watershed is saturated with water right now.  There is so much water that the rain and snow has no where to melt and it is pooling up in low spots and flowing into the river bringing mud, debris, and other organic matter into the system.  While there is a concern of farmlands leeching nitrates and what not into the system, the thing I see that is a benefit, is there is a ton of organic material being filtered through the system.  There is still more to come as only a fraction of the snow has melted and we are now well into the month of March.  All that runoff is loading the system with nutrients that will only help the river recover in the following seasons.  The drought dried up the river in many places and the previous seasons were not friendly to the river either.  Finally it seems that the river is getting a much needed recharge.

I only was able to fish the Teanaway twice last season before it closed due to the drought.  I am very much looking forward to slinging flies with my 3 WT fiberglass this season.  The Teanaway was a river that I used to fish regularly.  Especially before I purchased my boat.  I would wet wade to my hearts content hiking along the banks of the river from top to bottom in the summer.  While the Yakima was big and swollen for summer irrigation and filled with boats and floaters the Teanaway gave me a place of solitude…and a place to chase cutthroat. 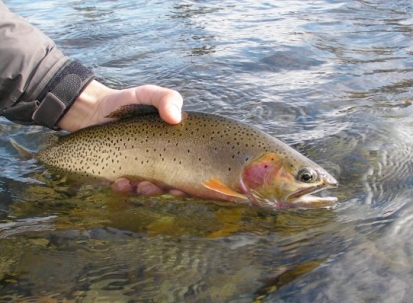 I first fell in love with Cutthroat on the Teanaway River.  I caught many over the years, and hiked high into the creeks and borders of the closed waters in search of wild and strange places and the trout that resided within them.  There was a time when rather large cutthroat used to be a regular surprise on the Teanaway.  I remember learning where the larger specimens would hide out.  The jog jams, overhangs, snags, stumps, boulder gardens, that bordered the larger rifles and runs were always a good place to look for a bigger trout.  The typical trout was hand sized, with a few pushing around 12 inches.  But the 14 and 16 inch cutthroat were always a welcome quarry.  I got really good at finding them.  I began learning areas where they would frequent, pools that held fish I came to catch and release multiple times.  There were even times I was greeted by larger cutthroat that typically were quick to head for log jams and snap off before a proper handshake.  All fish are great no matter the size, but when you are fishing a small river can catching tons of small trout and suddenly a larger fish breaks up the day with a surprise run or jump on a light wt rod it can really make the day!

The larger fish were less frequent after a few seasons, and the trout seemed to become less and less throughout the entire system.  The bulltrout I used to see, and the few that were hooked into and gently released when enjoying the action of cutthroat chasing streamers, were all but gone.  The culmination of this was the drought in 2015.  The river was strangled and scorched, leaving only a few surviving trout in the upper reaches, while the lower end of the river become over 70 degrees and less than 10 cfs in flow.  Many of the trout died, others were able to get down stream and seek refuge in the Yakima.  Now with the runoff I hope that the fish return and the Teanaway begins to refill with life.

Summer Time on the Teanaway

I will be there, fishing, conserving, and protecting the Teanaway River.  I spent some time this winter writing a grant proposal to Trout Unlimited’s Embrace a Stream Program as Conservation Chair for the Yakima River Headwaters Chapter 090 and we were successful in securing the grant.  The money will be used to start our first conservation project in a 10 year commitment to the Teanaway River.  Headwaters Matter and I didn’t get my Headwaters Hero title for nothing.  I invite all who are interested in helping make the Teanaway better than what it once was, to come to our local chapter meeting.  The next one is in Ellensburg at the Palace Cafe on March 16th at 7.  We will be discussing our Water Temperature Monitoring Project and planning work days for the year.  Hope to see you there and on the Teanaway River.

Hell…I may even be able to guide it.