I’ve been camping in the Teanaway while I’m here guiding. I’m only in the campground in the evening and early morning. I’ve left before 8 am every day. The Roof Top Tent gets a lot of looks and get people walking up to the rig and boat asking questions. It’s all good. I planned it that way. Never know where you might find a client or just another interested angler or outdoorsy person. Part of this switch was to live a little more like that. Just gonna soak in everything. Granted I’m hanging out in familiar territory, but it’s a good trial run before I start venturing out further and further in search of new fish. 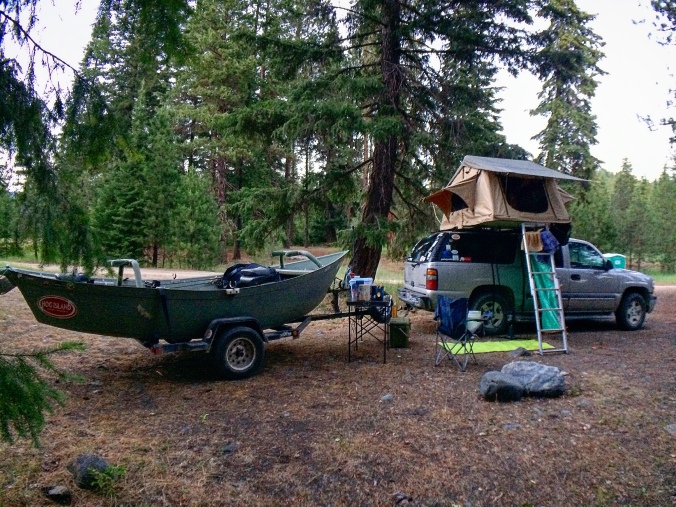 Today is an off day. The rig needs maintenance and I might have the trailer bearings checked just because, and I need a new phone. I’m hoping to be done with errands here before 1 pm and I think I might venture into the Cle Elum drainage to camp this evening. Might be too rowdy for me up there though. The Teanaway, once you drive up in there 12 miles or so, gets really quiet. Even with the handful of RVs last night in 29 Pines and surrounded by other campers..with kids…it was super chill. Even fished a bit. Water temp is 60 degrees at 8pm by the way.

I did have a funny camp experience last week when I stayed a night in the LC at Big Pines. I had set up my tent and it had just gotten dark. I figured I’d shower because I had fished for like 12 hrs that day and was pretty gnarly. So I put up my shower blind, stripped down to nothing but beard, and took a hot ass shower there under my tent. While I’m about halfway through my shower this lady comes up and says really loud, “So your tent is like a transformer?” Her accent was pretty think, European. I later learned they were here on holiday for the summer touring around the PNW. 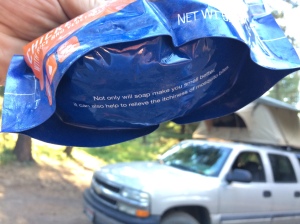 But I’m naked, and showering, and she’s just starting up a conversation. She could clearly see I was showering. I was like…well…this is happening… so as not to be rude, and being super chill, “Yep, opens right up and folds back down…don’t have to sleep on the ground.” I was rinsing my beard.

Her boyfriend walks up and says, “I like your boat…we’ve seen a lot of them…what kind of boat is it?” Thicker accent, and again…could clearly see that I was preoccupied with washing parts. 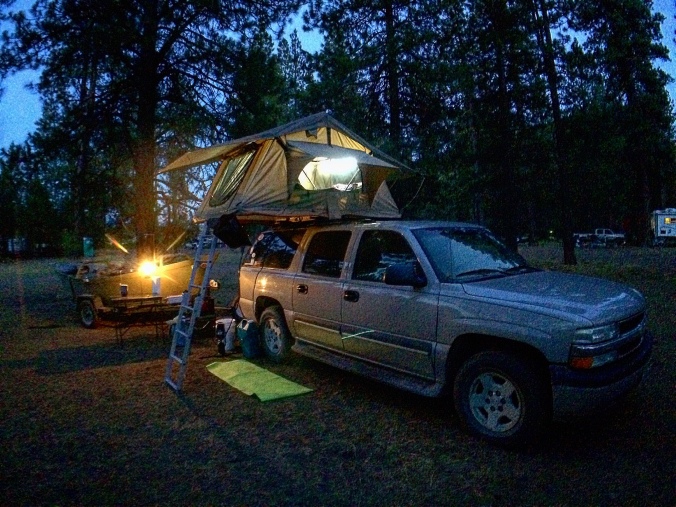 I decided to just join the conversation and wrapped a towel around me and stepped out from my shower blind. “It’s a drift boat, used for fishing for trout on the river. I guide here while I camp.” And we talked for a bit, got into the things I do, the things they do. Again, I’m still in my towel and they totally just walked up and started talking to me while I was showering. Which they also commented on and asked about. They were here touring around the states enjoying the outdoors. They’d been to a few national parks, saw the Sequoias, had been to Neah Bay and Crater Lake! They were driving through the canyon headed down through Yakima and into Oregon before heading further south. They were digging the canyon and desert landscapes and were thinking of seeing the Grand Canyon too. People my age, work in IT of all things! Taking a big vacation camping and enjoying the outdoors. Even I was a bit envious.

They left after a bit, said goodnight, and I replied in earnest back. Was a little weird, but just kinda happened. Camp Life…peoples, and things, and stuff happening when you’re living outta your rig and boat on the guide life.