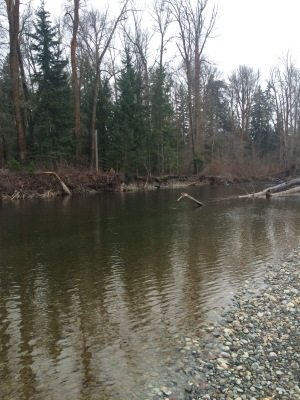 I took the opportunity to fish an old but familiar section of the upper river Tuesday afternoon. The weather was somewhat pleasant and the river was calm and warmer than usual.

I cut through the woods and was invigorated when I stepped into the rifle before me. It had been a while since I had been on the river. October was a great month and I fished through the first part of November before the cold snap hit. But too much time had passed.

I brought my trusty Winston due to its ability to chuck nymphs and streamers equally. I swung streamers on my way down river and was brought no luck. When I had hiked and fished a mile or two down I switched to the nymph. I worked my way back up river through the pools and deep runs. I worked the water with patience and a game plan. I cut the water into sections and worked lanes and changed depths until I found fish. It worked.

I found a large pool with a root wad halfway sunk in it. I worked my way closer to the structure adjusting my depth as it got deeper. I was fishing a single Skwalla nymph under a small yarn indicator. The indicator bounced and bobbed faintly as it drifted closer to the roots. I set the hook with a light lift and then a strong tug when I felt the fish shake. I was late on the draw and the fish was off as quickly as it was on. Unfortunate.

A few pools upriver I had my chance at a proper January trout. My indicator shot down. I had switched to a the typical turd sandwich of the Yakima with a stonelfy nymph trailed by a zebra midge. The shit sandwich is when you trail a San Juan Worm. At least that’s what I was taught. A productive method when fishing on the nymph and nothing is happening.

This fish hit hard and did the typical rainbow pull to deeper water. I saw a quick flash as it started taking more line. I let out the slack I had pulled in.

Now this is where I noobed it up and the river and the trout beat the angler.

I let out too much slack as the fish pulled. Of course a smart large fish took the opportunity to make me feel like I did when I first started fishing this river. It rolled and shook off after teasing me with its immensity. Bad Luck. Drop the ball. Angler Fail.

That was the fish of the day. Sometimes you may only get one chance at a fish during the winter. I mishandled both opportunities that the river saw fit to grace me with. There in lies the truth about fishing sometimes. Every once in a while, the river and the trout, win.

For those of you who are heading out this weekend to fish. Grab the streamer and the nymph boxes. The water will still be up a little but I would recommend sink tips or long leaders on your nymphs rigs. I tie a hand tied leader for winter nymphing that is 10 feet long with a super stiff butt section to turn over double and heavy rigs. I also use a sink tip with a nymph and swing them under the top currents in the deep runs. Small Olive streamers, skwalla nymphs, or other standard nymph patterns are typical. You might get lucky and see midges coming off and can get fish to take the zebra as a trailer.

Let me know how the fishing is if you get on the river. I will be working and tying through the weekend. Trying to find enough time to chunk out 2 sets of flies a day as we get closer to the season.