I love mayflies. I love tying them, I love fishing them, I absolutley love watching trout feed on them. But the Yakima River…my glorious homewater which does sport some epic mayfly hatches…is a Caddis river. 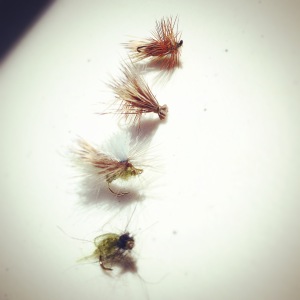 The Mother’s Day Caddis or American Grannim is the most abundant and prolific hatch that our river has to offer and our trout know this best of all the species that dine on the aquatic little moth thingy.

It’s a quirky insect. One that troubled anglers for decades. The 70s brought us new science to help the angler better understand his quarry.  Anglers such as Gary LaFontaine spent countless hours observing trout and their secret and intricate relationship with the Caddis. His book simply titled Caddisflies is amazing. Read it.

Back to the Yakima River, the Caddis are early this year. And the trout are already on it. The Yakima River gives up her secrets willingly during this time. Knowing how to properly and accurately break down a Caddis hatch can give you some of the most memorable and enjoyable days of fishing on this river.

While the Lower C is the place to go for the Caddis Hatch it happens on this whole bloody river and trout know it. The upper fished just as good as the lower in my opinion and cutthroat get stupid for Caddis. The trick is getting the timing right. Caddis hatches typically fall into a rhythm and follow that pattern for the course of the season.

Throughout the season the hatch will come off later every night. Sometimes a few minutes some nights a whole half hour later. Pressure and temperature are a factor as well as water conditions. Hence why we have an early hatch. Everything is a bit funky so things are early.  The best way to get the hatch dialed in is to be on water and observe it and fish the tail end of it making note of when it started and then hit it the next day. Or…go with a guide or a friend that is already dialed in and knows when to get on it.

Knowing when the Caddis hatch pops off gives you your midpoint when making a game plan for fishing. Two hours before the actual hatch I typically start throwing a deep water Caddis pupa as a trailer fly under a stonefly nymph. Then about 40 minutes before the hatch I switch to a hopper dropper or a light indicator set up with a weighted Caddis pupa or soft hackle pupa, two feet down or so, waiting to see if fish have moved into position for dry flies.  Swinging flies at the end of drifts every time. The second I see fish start to boil I grab my dry fly rod. 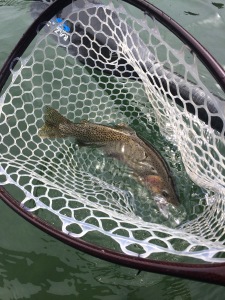 When fish are boiling you will typically see dorsal fins and tails or just the backs of the fish. This means they are eating emerging pupas as they are making their way to the surface to hatch. Throwing dry flies will get a few bumps but to catch all the fish in the river, a sparkle pupa 18-22 inches below a small tuft of yarn tied into a blood knot above the tippet, or as a dropper, is the way to go.  This is where fish gorge themselves.

Next for me is a special little emerging Caddis dry I tie that works really well for fish that are eating the struggling emerging Caddis on the surface. Typically the first time you see noses breaking the surface. Especially slow sipping noses of smart large wary rainbows that won’t eat an elk hair that floats by bit will smash a Caddis emerger….mmm Caddis…its what’s for dinner.

Big trout are smart. The typically eat two stages of the Caddis hatch…the emergers…and the spent ones. We will get to that later.

Next is when the fish get silly and will take anything. Sometimes it’s only about 15 minutes of the actual hatch. The frustrating sweet spot everyone looks for when they are fishing Caddis patterns. It’s there…but it’s easy to miss and I tend to not worry about it so much. The emerging insects when fish are boiling is where it’s at dudes…listen to the trout man.

Once the furor of fish eating is over…it’s time to switch to wetflies.  A soft hackle with a little Antron and a wire wrap is all you need. Slinging that thing into softwater, eddies, and the foamy stuff for the big trout coming out at dusk, away from the chaos…to sip peacefully on spent Caddis as they collect in all the trouty places of the river.

Peaceful that is, until you stick a 20 plus incher that isn’t very happy about you F’ing up his chi, and it’s show time. Wild Yakima Trout at their finest. Jumping, yanking, taking line, giving guides heart palpation’s and making novice anglers buttholes pucker. Ya you know the ones I’m talking about. Those crazy big fish that usually pop off right near the boat after you think they are tired out. Mmmm…ya we like those trout…we like them a lot.

Those are the times I’m coming into the take out at 8:30 or later with a headlamp on. Good times.

So that’s how I break down the Caddis hatch. It’s one of the only hatches where I’ve actually caught 60 fish in a day.  That and the cranefly hatch…mmm craneflies. But that’s for later.

See ya riverside. Bring the Caddis…it’s what’s for dinner.